“And I looked, and behold, a white horse! And its rider had a bow, and a crown was given to him, and he came out conquering, and to conquer.” Revelation 6:2 ESV

Whether you get the jab or not is your business. But the more important question is why. If you are doing it out of fear, that’s called sin! If you’re doing because you are being forced, that is illegal! They call it a mandate but a mandate is not law. It is an unconstitutional forcing by an evil government trying to suppress a free people! And another question is why are those who are mandating the jab not requiring it upon themselves? Something is not right with this picture!

Please pray that truth would be exposed at all levels! Pray that, we the people, would stand up against tyranny and know when to say yes and when to say no to such “mandates!” Pray that our eyes would be open to see that what is being presented in the name of peace and the good for others is actually a conquest! 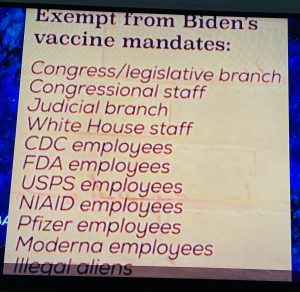