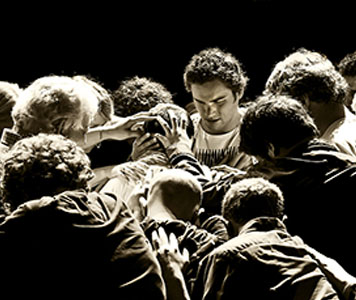 While God can do anything He desires, He literally chooses to limit Himself to our asking. John Wesley would say, “God does nothing apart from prayer, and everything with it.” Historically, when the church prayed God would move, when it didn’t darkness set in. D L Moody would say that every great move of God can be traced to prayer. As far as we know, every recorded spiritual awakening has been preceded by united, and fervent prayer! Andrew Murray said that the neglect of prayer is the great reason the church lacks power. In other words, our prayerlessness has led to our powerlessness to impact our world. So for the church to have an impact it needs to pray, from the pastor down to the kids. Prayer must not be seen as an optional extra just for the uber-spiritual, but as a passionate and vital part of our lives and the ministries we are involved in. If we want to impact our world, prayer needs to be an essential component in our arsenal.

The advancement of God’s kingdom and His will being done is directly related to our praying for it. Well, at least that’s what Jesus said (Matthew 6:10). With prayer being so important it is no wonder the enemy works so hard to undermine it. Our culture itself has minimized the spirit realm, and values production and results over character and spiritual fruit. The bottom line is most people struggle with prayer, including pastors.

Most believers assume their pastors spend much time in prayer, after all isn’t that what they are supposed to do…? Prepare, preach the Word and pray (Acts 6:4). The fact is, most pastors feel the pressure for results and have lost the edge of prayer in their own lives. Research has shown the average pastor prays 20 minutes a day, with many praying much, much less!

Pastors and leaders not only need to pray, but they need to be prayed for. Unfortunately, more pastors are preyed on instead of being prayed for! We know the pastors and leaders we are working with so value being praying for! It is a breath of life and fire into their soul. We converge, whether at their office, our prayer room, or as of late, via Zoom and 45 to 60 minutes later (up to three hours!) we leave, with them feeling refreshed and cared for. It is a brief pastor’s prayer pause!

Mobilizing prayer begins with the pastors and works its way out through the congregation. By impacting one pastor, literally hundred’s, if not thousand’s of people, can be impacted. It is a wise investment! God has given us much favor with pastors and leaders in our city, and as praying people, we are running through those doors, awed and humbled!

We wanted to dive into this ministry when we first moved into Athens in early 2010. But God’s ways and timing are often baffling (Isaiah 55:8-9). So we started small with a handful of pastors and began building a foundation of trust, support, and vulnerability. Now, after more than ten years of ministering in Athens these little monthly pastors’ prayer gatherings have continued to gain momentum. Our passion, calling and intent has remained the same. Recently for over four years Senior Pastors met together to pray into and discuss racial issues, and this was above and beyond our monthly pastors prayer gathering. Student Pastors, Group’s Pastors and Executive Pastors from across our city also get together to pray. Campus Ministers from across UGA meet up to pray. Starting with a handful of pastors we began praying for revival every week. It has grown and now leaders and intercessors join us twice a month. God is allowing us to mobilize prayer across this city. We have been told that nothing like this has ever happened in Athens. The exciting thing is that we are not alone. We get to do what we get to do because many others have “prayed the price” before us! There are a lot of praying pockets of people across this city and we are all excited as God is connecting us together!

It is our desire to please and obey God wholeheartedly. Athens Prayer Network is what we believe God has asked us to do. In fact, we believe it is the reason God brought us from the other side of the world to Athens, for such a time as this.

I am (Steve) the son of a praying mom. Early in my walk with Christ, while I was a student at BIOLA University in California I had a destiny moment. I was heading back to school one night after doing some youth ministry in the Baptist church I was involved in. While listening to a cassette message (remember those days?) by Chuck Swindoll, God convicted me of my prayerlessness. Chuck said something about if you wanted to be significant for God you must do it from your knees. When I arrived back at my dorm I got down on my knees, repented of my prayerlessness and launched into a life of private prayer. Through my prayer life God has led me to pastor, plant churches, and lead ministries in the USA, in Australia and in other places around the globe. Prayer has been central in my life, and has provided many amazing stories and opportunities to minister for Him.

While in Australia, as a church growth consultant with CRM (Church Resource Ministries), God brought me to a place of holy frustration. The churches we were working with were growing in size but not necessarily in faith. It was at this point that my private prayer ministry became public. I started working with pastors to help them nurture a passionate faith as well as mobilizing and training a praying people around them. In one of the cities we lived in, because of the pastors praying together they joined forces to host evangelistic campaigns, and even jointly purchased a café to work out of to reach their city. God said that where there is unity, there is blessing (Psalm 133). Building unity is a key priority for us!!!

• Prayer leadership while in Australia included starting and leading prayer networks, and gathering pastors to pray in all the different places we lived.

• Designed and led schools of intercession on a citywide level in Berwick and Melbourne, Australia.

• Developed several prayer resources that we used all over Australia, and continue to use today.

• Was invited to provide a prayer covering at the 21st Century Church Conference in Brisbane Australia. We recruited intercessory worshippers, broke them into teams, then prayed and worshipped non-stop for 6 days and nights!

• Participated as an invited representative for Australia at Gideon’s Army in S Korea (with 200 national prayer leaders from around the world) and at GCOWE (Global Consultation for World Evangelization) also in S Korea.

• Was privileged to launch & lead Worshippers On Watch (WOW) where each week for over 4 years groups from the city led 2-hour intercessory worship watches. We would do this for 12 hours on Fridays and 3 hours on Tuesdays. Each month we moved to different venues – from pubs to churches to hotels.

• Participated in two mission trips to China/Tibet where we rode mountain bikes to some pretty remote regions to worship and pray for people in villages and to show them the love of God.

• Since being in Athens, I have had the privilege of teaching a course (four times) called Spiritual Warfare & Victory in Christ at the Athens College of Ministry.

Our family lives close to the University of Georgia. Shellie & I are approaching our 36th wedding anniversary. Living with us are Jasen (one of our three amazing young adult sons), Jade (our Ibizan Hound mix dog) and Onyx (some kind of wild cat that we adopted). Our oldest son graduated from UGA (Physics), is married and lives in Athens. Our youngest son also graduated from UGA (Graphic Design) and lives in New Zealand.

Athens, Georgia, well over 200 years old, is a university city with a population of over 120,000 (much more if you include surrounding areas), of which over 38,000 are university students. UGA is the oldest and first public university in the USA, being established in 1785. Until just recently Athens had been rated in the top partying schools in the United States. Not exactly something to brag about. Last we heard, it was no longer in the top ten, thanks to prayer and the awesome work of campus ministries! It is also one of the top public schools in the nation. It is a place where young people move out from to the nations! Students come here from all over the world.

Impact this city, impact the world! God prepared us and brought us here, as well as many others, to help prepare for a movement in Athens and beyond!